#ImWithHer   #Now4Hillary
We'll be at Gourmet House of Hong Kong at 1438 E McDowell, Phoenix
7 pm on...
Come share in this great celebration with the Inez Casiano/Central Phoenix NOW chapter.

Arizona Women Leaders to Sound the Alarm at Press Conference October 12:
Trump and McCain a Danger to Women
Women Leaders in Arizona join effort to turn out women’s votes for Hillary Clinton for President and Ann Kirkpatrick for U.S. Senate

Women have the power to determine the outcome of the presidential and U.S. Senate race in Arizona. A coalition of women leaders has come together under the banner of She Wins, We Win campaign to announce plans for mobilizing the largest women’s vote in history to move forward progress for women.

The unprecedented coalition of women leaders is working to make sure voters know what is at stake in both the Presidential and U.S. Senate race in Arizona, and to sound the alarm on the dangers a Trump presidency would pose to women. The outcome of this election will determine our nation’s policies impacting women’s rights for the next 40 years: the make-up of the Supreme Court; access to reproductive healthcare including abortion and birth control; pay equality; paid family and medical leave; passage of the Equal Rights Amendment; civil rights; LGBT rights; the ability of our nation to deal with climate change; immigration reform; and reducing violence including sexual assault and gun violence.

WHAT: ​She Wins, We Win press conference featuring Arizona women leaders
**Spanish speakers will be available for interviews

She Wins We Win is a campaign of the Feminist Majority

Paid for by Feminist Majority. Not authorized by any candidate or candidate’s committee. www.feministmajority.org 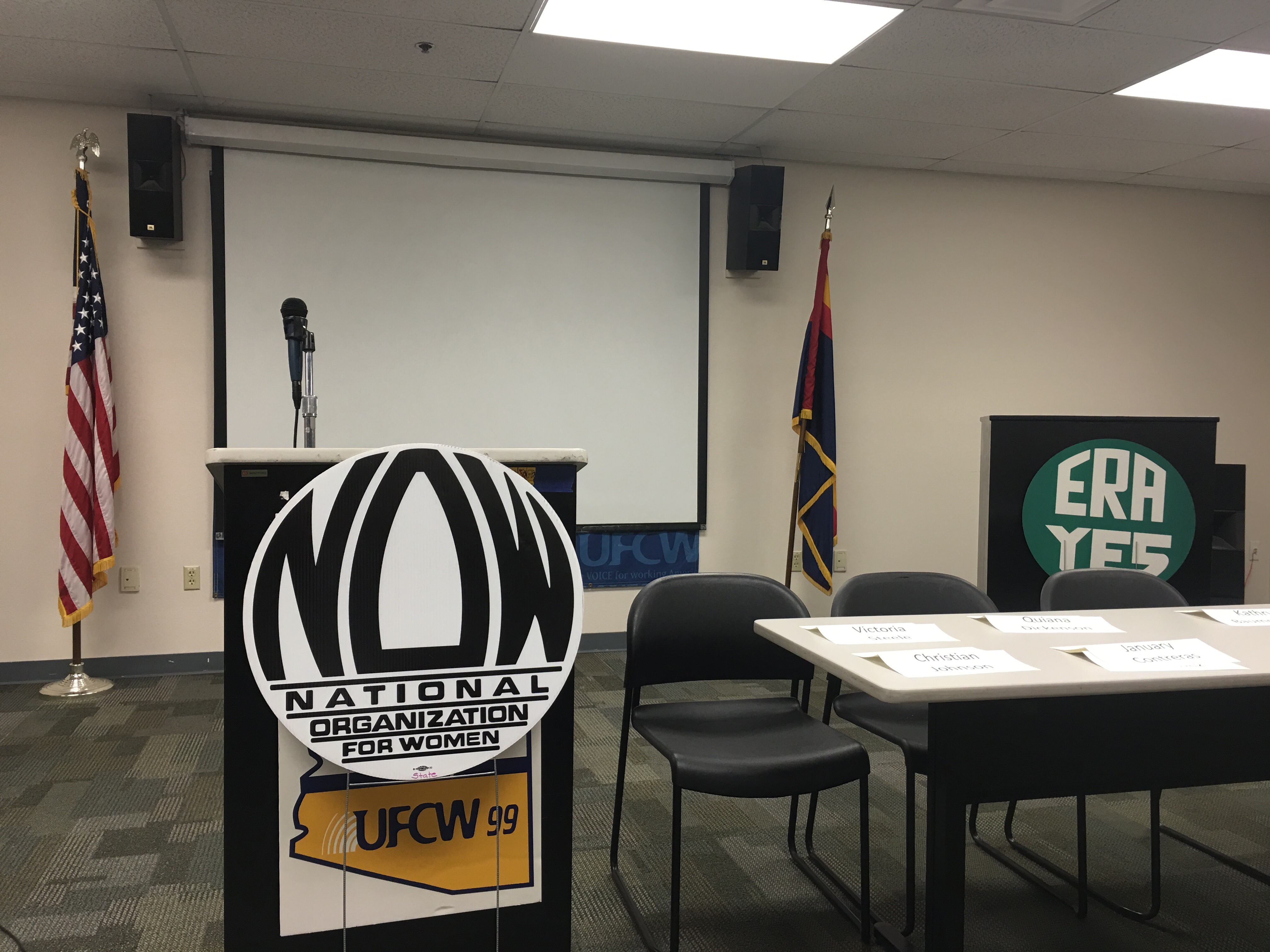 Wine raffle, bumper stickers yard signs and other campaign fun will be there. Ohhhhh and even some of our favorite candidates, hmmmmmmm.

Feminist Majority's campaign "She Wins We Win," is working with Planned Parenthood, Arizona NOW, NARAL Pro-Choice Arizona, NOW and other organizations in Arizona.

This post is published with permission 10-3-16
The Feminist Majority is working with Planned Parenthood, Arizona NOW, NARAL Pro-Choice Arizona, NOW and other organizations in Arizona to bring together an unprecedented coalition of women leaders and activists to sound the alarm about this critical election and to help turn out the largest women's vote in history for Hillary and Ann.
Celebrated feminist actors Kate Burton (Vice President Sally Washington on the hit ABC series Scandal) and Anabeth Gish (also a regular on Scandal and many other beloved television series) will be joining us along with other leaders in the Phoenix area.
Our Phoenix She Wins We Win event and press conference will be Wednesday, October 12th, 10:00AM at the UFCW located at 2401 N. Central Avenue. [We are scheduled to have a Tucson event and press conference later that afternoon, 2:30PM, location TBA.]
Please let us know if you and any other members or officers will be able to join us. We would be thrilled to have as many of you as possible. If you would like to be listed on our media advisory, please provide your name, title and organization. If you are a non-profit, you may list your title and organization- for identification purposes only.
We hope very much to see you and other members of your organization there!
She Wins We Win is a campaign of the Feminist Majority (SheWinsWeWin.org). As you know, there is so much at stake in the 2016 election — women’s lives and futures are on the ballot. The outcome of the election will determine the majority on the Supreme Court, policies on women's health and access to abortion, closing the pay gap, raising the minimum wage, securing paid sick and paid family medical leave, ending violence against women including sexual assault on college campuses, college affordability, immigration reform, full LGBTQ rights, stopping gun violence and addressing climate change, and more. We must help to make sure that these and other critical issues of great concern to women stay front and center in this election.
We are reaching out to women leaders from all sectors — elected women, women of color, labor, healthcare and reproductive rights, the law, business, rape and domestic violence, non profit service and advocacy groups, child care and education, and college students— to participate. We invite you to recruit and bring your colleagues, board members and supporters to show a rainbow of broad support by women under one umbrella in a rally-like atmosphere for Hillary and Ann.
We hope very much you will join us - and bring others to attend with you. Thanks so much again.
Best,
duVergne Gaines
National Organizer
She Wins We Win
A project of the Feminist Majority
http://shewinswewin.org
Office: (310) 556-2500

With #NOW4Hillary It’s easy.
You can make a big difference in this race by calling voters today.

“In the name of democracy and freedom, I feel obligated to use my voice to encourage voters to make Hillary Clinton our next President. In doing so, we will all be on the right side of history.” Tony nominated actress Adrienne Warren

“I have never made calls. I actually hate talking on the phone ... I am finding that this is making me find my voice.” Kathy

“GOTV was important enough for me to wake up an hour and half early in California to make calls to Michigan. I made as many as I could — the next best thing was getting my dad involved. My mom then sat next to him, and they worked together. They made 26 dials (and even had a tally sheet)." Sabrina

Author Dianne Post is a Phoenix attorney and advocate for gender equality.
Reposted Opinion article originally published on the AZ Capital Times blog, August 15, 2016 at 2:44 PM; http://azcapitoltimes.com/news/2016/08/15/ballot-power-the-importance-of-women/16.
On August 26, Arizona women will celebrate women’s right to vote. Women will commemorate the sacrifices and perseverance of those who fought 50 years to secure for women the right to vote. Women stood in pouring rain and freezing snow. They were beaten, jailed, went on hunger strikes, were force-fed and called crazy for wanting to vote. The women experienced harsh conditions in prison with poor sanitation, infested food, and dreadful facilities. 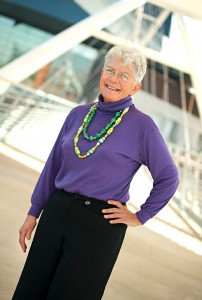 Early fighters such as Susan B. Anthony, Elizabeth Cady Stanton, Lucy Stone, and Sojourner Truth passed the torch on to other women such as Carrie Chapman Catt, Alice Paul and Lucy Burns. Anthony never lived to vote legally; she had been arrested for voting before the 19th Amendment passed. Paul never lived to see the ERA passed – indeed it’s not passed yet – but in spite of violence and abuse, betrayals and reversals, the women never wavered in their dedication because the movement was not just for them. It was for the future – for us.
Arizona women will celebrate the right to vote on August 26 because in the 96 years that women have had the vote, the worst fears of the opposition in the 1800s have come true – women vote differently. The gender gap has been apparent since 1980 and was decisive for the presidential victories of Clinton and Obama. It is expected that this election will produce the largest gap yet.
Voter-suppression efforts, the gutting of the Voting Rights Act by the Supreme Court in Shelby vs. Holder, re-districting shenanigans and the gridlock in Congress has, as intended, discouraged many from voting. Arizona is in the top third of states with women representatives in the state Legislature, but there has been no improvement since 2004. In spite of that, Arizona ranks 46th for the number of women registered (59.3%) and 43rd for the number who actually vote (46.8%) – a very low turnout indeed.
But women, like African-Americans, bought the vote at a high price. Today Baby Boomers and African-Americans vote at the highest rates because they understand the price paid and the value of constant civil rights agitation.
Women of all ages need to understand the significance of their vote to elect the first woman president, a final vindication for the arrests, beatings, force-feedings, and prison endured by women who fought for the right to vote.
In Phoenix, the celebration takes place from 5:30 to 7:30 p.m. on Aug. 26 at Central High School. The event, hosted by a coalition of women’s groups, is expected to draw an audience of at least 600. For information and tickets, see www.facebook.com/votes4womenaz/, Twitter is @votes4womenaz